Become the leader you were meant to be.

You’ve earned your associate of applied science, now take the next step toward your future in leadership. 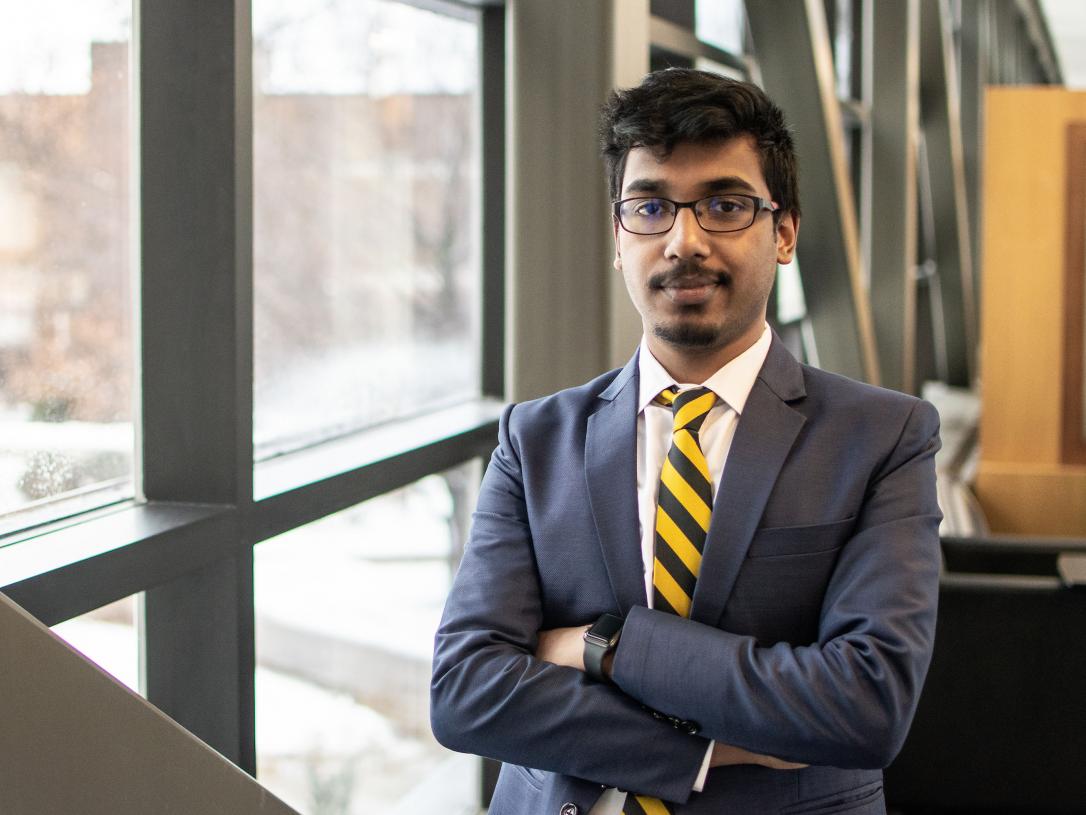 Your future is waiting.

Nine tracks to choose from. On-campus, online, and hybrid classes designed to accommodate your schedule. Faculty and advisors who want to see you succeed. It’s what our applied science degree is all about.

Partnering for your success.

Curious about how your degree might fit into Purdue Fort Wayne? Through our articulation agreements with surrounding schools, the transfer of vocational, technical, and academic credit from your associate of applied science degree is easier than ever. Check out the schools we’ve partnered with.

From modest beginnings in 1973 in a rented facility, the College has grown in stages to its current campus, located on 131 acres in Piqua. Its enrollment and offerings have grown steadily during its brief history, from 309 students enrolled in 30 courses in 1973 to more than 3,000 students enrolled today in about 30 technical fields, a broad range of baccalaureate transfer programs, developmental course work, and continuing education offerings.

Edison State Community College offers five different degrees, two of which are designed for transferring to a four-year college or university, and three of which prepare graduates for immediate employment. Providing modern campus facilities and leading-edge computer and Internet technology, Edison State Community College cannot be surpassed for its learning environment.

Henry Ford College (HFC) was founded in 1938 as a community resource and educational gem, which has been its legacy for more than 80 years.

Today, HFC is a public community college in Dearborn, Michigan, enrolling 13,000 students and offering a bachelor's degree, 3+1 programs, associate degrees, and a variety of certificate and workforce development and training programs, as well as dual-enrollment options. HFC offers classes on its two Dearborn campuses and other regional locations and offers many popular online courses in a variety of academic programs. Non-credit and free course options are also available to qualifying participants.

Ivy Tech was founded in 1963 as Indiana Vocational Technical College. Back then, we focused primarily on technical and vocational education—but in the more than 50 years since, we’ve gone through enormous changes.

We offer hands-on experience with some of the state’s most advanced technologies and training facilities, plus the convenience of more than 1,000 online classes, and the attention that comes with small average class sizes.

We are accredited by the Higher Learning Commission. We shape our curriculum with the needs of local communities in mind—while our affordable tuition rates (annual full-time tuition just over $4,300) keep higher education accessible for those communities’ residents. A consideration that results in 91 percent of our graduates staying in Indiana.

All those elements combine to make Ivy Tech a true engine of Indiana’s workforce, training Hoosiers for the careers that will grow our future economy.

James A. Rhodes State College (formerly Lima Technical College) was officially chartered in 1971 as a state, public-assisted associate degree-granting institution of higher education. A study conducted by community leaders in 1967 revealed the need for a number of technical educational programs to satisfy the employment demands of area businesses, industries, and agencies. As a result, Penta Technical Institute of Perrysburg (now known as Owens Community College) established instructional programs on the Lima campus in 1969. In the fall quarter of that year, a total of 49 students enrolled in the nursing program, the only course of instruction offered.

In June 1971, at the recommendation of the Ohio Board of Regents, the Allen County Technical Institute District was formed. Functional operation of the new institution began in July 1971 under the interim auspices of The Ohio State University. Finally, in September 1971, the college received its own charter and began operation under its own Board of Trustees. The continued cooperative relationship between Lima Technical College and The Ohio State University has produced an efficient campus operation and a very unique and effective educational environment.

Since the fall quarter of 1971, in which 468 students registered, the college has experienced remarkable growth and development. Today, the college offers over 90 associate degrees, majors, and certificate programs; and the college’s online coursework and off-campus learning centers serve 33 Ohio counties. More than 25,000 participants from manufacturing to allied health organizations have benefited from workforce development services.

As Lima Technical College grew, the need for a name change became increasingly more evident. On March 1, 2002, the Lima Technical College Board of Trustees voted to change the college’s name to more accurately reflect the scope and diversity of its courses and services to west central Ohio and beyond. Effective June 24, 2002, the college formally changed its name to James A. Rhodes State College, in honor of the former Ohio governor who spearheaded the state’s two-year college system.

Founded in 1901, Joliet Junior College is the nation’s first public community college. From humble beginnings at Joliet Township High School to a collective six campuses and education centers that serve approximately 30,000 students each year, JJC has been shaped by the community in which it resides. The halls echo with the footsteps of thousands of students that have benefited from JJC’s student-focused approach to education, from the industrial age of the 1900s to today’s technology-driven era. Innovative programs, engaging clubs and organizations, and successful athletics programs have established JJC as an institution of first choice and continues to attract new generations of Wolves.

If you live in Macomb County, chances are your life is touched by Macomb Community College every day. You will find our alumni in your doctor’s and veterinarian’s offices, police and fire departments, business and industry, as well as in Macomb’s own classrooms and offices. What draws our alumni back home is a mission that encompasses education, enrichment, and economic development, making Macomb a major contributor to the community’s overall quality of life.

We offer occupational programs, transfer programs, dual-enrollment, and early college programs for area high schoolers, as well as workforce and industrial training. You can take advantage of transfer options through the Michigan Transfer Agreement and more than 125 articulation agreements with four-year universities, which provide seamless transfer of credits.

MCC was established in 1965 and is focused on making a college education accessible and affordable. You can learn as you like at MCC, with classes in four formats: in-person, online, hybrid, and live online. Classes are scheduled on weekdays, evenings, and occasionally on Saturdays with two campuses to serve you in Sidney and Greenville.

MCC faculty and staff are committed to helping students succeed. With an average class size of 15 students, you’ll get personalized instruction in a variety of subject areas from faculty members who are among the best in their fields. You’ll be challenged and rewarded by our coursework, with faculty using the latest and most innovative teaching methods in all our 59 program areas. They also inspire you to think critically and creatively.

The annual tuition at MCC is a fraction of the cost of a private college or four-year university, yet we prepare you for the same careers and provide the same opportunities for success.

Northwest State Community College (NSCC) was founded when the Ohio Board of Regents approved the formation of Four County Technical Institute on June 13, 1968. The college offered its first classes one year later. In 1972, the college moved to its current location and was renamed Northwest Technical College. In 1994, Northwest State officially became a community college. This enabled the college to offer associate of arts and associate of science programs that could easily transfer into a four-year degree program at partnering colleges.

NSCC is a public two-year college that is accredited by the North Central Association of Colleges and Schools. This accreditation allows the college to offer degree and certificate programs in the fields of arts and sciences; allied health and public services; business technologies; industrial technologies; math, science, and engineering technologies; and nursing.

The college also offers noncredit classes on over 300 subjects. These courses are offered through Custom Training Solutions, a division of NSCC.

On October 24, 1961, residents of the Livonia, Plymouth-Canton, Garden City and Clarenceville school districts voted to establish a community college in an effort to create an environment for individuals seeking the opportunity to grow intellectually and strengthen their economic independence. (Northville Public Schools joined the district in 1963.)

Originally called Northwest Wayne Community College to reflect the communities that encompassed the college’s district and primary areas of service, the name was changed in February 1963 to Schoolcraft College in honor of Henry Rowe Schoolcraft, a 19th century explorer, scholar, and Indian agent who played a part in the early development of Michigan.

Construction of the original three buildings on the main campus in Livonia began in June 1963 and August 31, 1964 was the first day of classes for the first group of students to attend Schoolcraft College.

Since our creation more than 50 years ago, Schoolcraft College has been focused on progressive innovation, educational excellence, and academic success. You can enjoy highlights of our memorable achievements throughout the years, demonstrating our commitment to expanding the value of your education with the Schoolcraft College Timeline.

Southwestern Michigan College (SMC) is a small college with big opportunities. With degrees that serve as launch points to study at top universities, a feature-packed Student Activity Center, thriving student life, and some of the nicest residence halls in the state, SMC offers the full college experience for a fraction of the cost.

SMC was founded in 1964 on the principle of knowledge for all—the idea that everyone should have access to quality education. Since that time, SMC continues to pursue excellence in academic quality and the student experience, all while providing a personal touch and keeping costs low.

Students from all walks of life have come to SMC to pursue their dreams. We are proud to be the school of choice for valedictorians, athletes, local pageant queens, science prodigies, rising stage talent, and everyone in between—all with the common goal of working toward a brighter future.

Clinton Community College (CCC) plays a unique role in the local community and within the state by offering traditional and nontraditional students access to a variety of educational programs taught by highly dedicated faculty. Many CCC students attend for two years, earn a degree or certificate, then transfer to a four-year university. Other students graduate and enter directly into the workforce or attend CCC for a short period of time to meet a specific educational need. In the fall of 2019, Clinton Community College enrolled approximately 1,250 full-time and part-time students.

While the college features the modern equipment and facilities necessary for contemporary educational needs, its distinctive architecture and spectacular natural setting hint at significant times of the past. In fact, the Bluff Point locale has been the scene of some of the most important events in the founding of the American Republic and its tradition. It is fitting that an area so magnificently beautiful and so much a part of the early development of the United States is maintained for public use and enjoyment.

Bluff Point belongs to the citizens of Clinton County who now share the breathtaking scenery and sense of history, which had once been reserved for only a few.

Washtenaw Community College (WCC) was established in 1965, when Washtenaw County voters passed a millage to provide financial support for a countywide community college. WCC opened with a six-member Board of Trustees, a newly appointed president, and a parcel of land in Ann Arbor and Superior Townships. Classes started in September 1966 on a temporary campus at Willow Run, with 1,200 students enrolled in 30 occupational programs and a transfer curriculum.

From this modest beginning, WCC has grown into one of the nation’s premier community colleges with an annual enrollment of more than 18,000 students in credit classes each year, and thousands more in economic and college development classes. Our diverse student body includes more than 1,000 students from 100-plus foreign countries. Our 285-acre campus and strategically located extension centers, operating resources, technology enabled facilities, and instructional quality are the envy of post-secondary education institutions near and far.

Take your first step toward making your mark on the world by pursuing a degree from Purdue Fort Wayne.