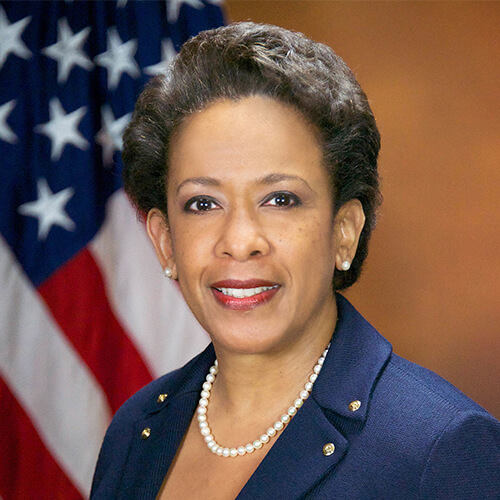 83rd Attorney General of the United States
“A Conversation with the Honorable Loretta Lynch”
Tuesday, March 31 at 7:30 p.m.
Tickets available starting on March 16

One of the most accomplished public figures in the country today and the first female African American attorney general of the United States, Loretta Lynch has been a leading progressive voice during her highly distinguished career of more than 30 years.

Born in Greensboro, North Carolina, the daughter of a school librarian and a fourth-generation Baptist minister, Lynch was inspired by stories about her grandfather, a sharecropper in the 1930s, who helped members of his community who had no recourse under the Jim Crow system.

While in private practice, she served as a volunteer legal advisor for the International Criminal Tribunal for Rwanda, established to prosecute those responsible for human-rights violations in the 1994 genocide in that nation.

Before being appointed as attorney general by President Barack Obama, in 2015, Lynch served as the head of the US Attorney’s Office for the Eastern District of New York. She became known for the high-profile civil-rights conviction of two Brooklyn police officers who assaulted Haitian immigrant Abner Louima.

Lynch has been instrumental in shaping the direction of the nation on a number of tough issues, including civil rights and improving the relationship between local law enforcement and the communities they serve.