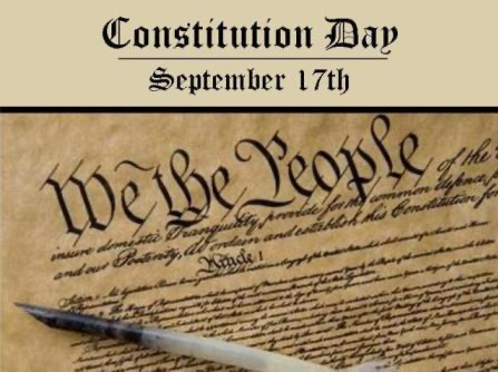 Senator Robert C. Byrd, a West Virginia Democrat and Congress' unofficial constitutional scholar, believes that American primary, secondary, and post-secondary students lack significant knowledge regarding the United States Constitution. In December 2004, Senator Byrd proposed an amendment that was passed by both the House of Representatives and the Senate in an attempt to increase students' knowledge about the constitution. On December 8, 2004, President George W. Bush signed the bill (public law 108-447) which designates every September 17 as Constitution Day.

It is important for students to have an understanding of the U.S. Constitution and an appreciation of this valuable document that has been the foundation of the freedoms provided to all Americans.

The legislation requires that all educational institutions receiving federal funds implement educational programs relating to the U.S. Constitution on September 17 of each year. This date was chosen due to the fact that on September 17, 1787; 39 of the 55 Founding Fathers met for the last time to sign the United States Constitution and present it to the American public.

Click below to find out which Founding Father you are:

Or maybe you are ready for the biggest responsibility of all? Be President for four years by clicking the game below:

View Purdue Fort Wayne calendar of events or check out our social media for event details on September 17.